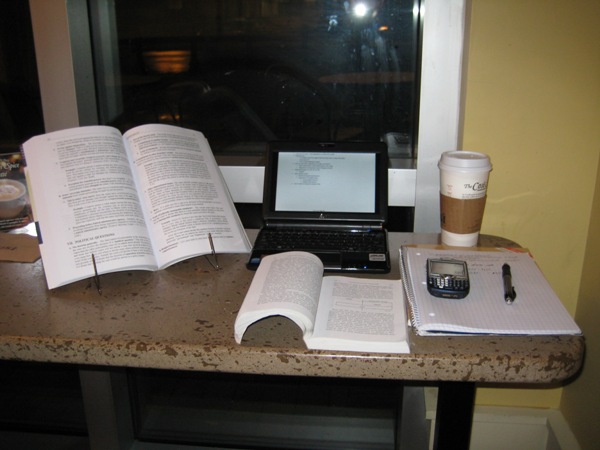 (Studying Con Law at Cosi in Arlington on Saturday, after my visit to the White House.)

I mentioned a few days ago that I joined the netbook revolution and promised more details. Last Friday, I bought a used Asus Eee 901 -- a small 6.9"x8.9" netbook that weighs less that 2-1/2 pounds. I couldn't be more pleased with it so far. 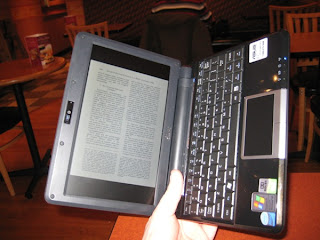 As I was writing about using a netbook as an e-book reader a week ago, I talked myself into thinking that the Asus Eee 901 would be best for this purpose -- a combination of tiny size, long battery life (6+ hours), and flash based memory (no moving hard drive) made me think it was the perfect device for reading PDF files. After writing that post, I checked on Craig's List and found one on sale for $285. I met the guy selling it in Manassas last Friday, talked him down $20, and sealed the deal. Turns out we graduated from the same high school.

What I got for $265 was a fantastic little computing companion. Here are some of my initial impressions so far:
If you can't tell, I really love this thing so far. It's the best $265 I've spent in a long time. I'll continue to pass on my impressions as I get to use it a bit more. For now if I could, I'd give it 5.5 out of 5 stars.

Below is how the Eee 901 compares in size with my Lenovo ThinkPad X61 tablet and my Sony TX-750 (which is back in the shop -- again!). The yellow rectangle represents my Thinkpad, the blue my Sony, and the green the Eee 901. Like I said, it's tiny! 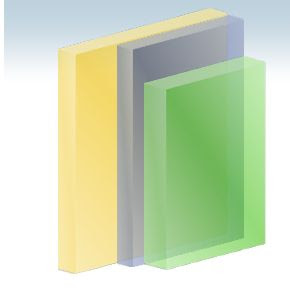 You can read reviews of the Eee 901 here, here, here, and here. Jkkmobile also has this comprehensive video review:

Here's another video review comparing the Eee 901 to several other netbooks.

If you're looking for a versatile laptop for school, travel, or just knocking about and don't need too much power, I'd suggest looking at a netbook of some sort. They're incredibly compact devices that can get a lot of battery life (if you get one with a 6-cell battery). They also keep dropping in price, with many people expecting to see new ones selling for ~ $200 sometime next year. Highly recommended!
Posted by Brian Hollar at 8:46 AM

Email ThisBlogThis!Share to TwitterShare to FacebookShare to Pinterest
Labels: netbook

I got one recently, too. It really does make me irrationally enthusiastic :)

I totally agree w/ you...even though I don't have a netbook, I think a netbook w/ the peripherals you mention is pretty much all most people will need.

It's also pretty amazing that this netbook for a few hundred dollars is so much better than your Sony which cost, what, about $2000?