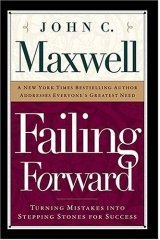 John Maxwell's book, Failing Forward, remains one of my favorite books I've ever read. In it, Maxwell discusses how "the difference between average people and achieving people is their perception of and response to failure". This book contains a lot of great insights and pearls of wisdom about the process of learning and life.

Maxwell does an excellent job encouraging people not to identify themselves with failures in their lives (or with their successes either). Instead he challenges, his readers to learn from each experience in life and understand that the only way to learn is through a series of trials and errors. Any expectation that we will go through life without making any mistakes only leads us to disappointment and magnifies the misery we feel when we fail.

"Don't waste energy trying to cover up failure. Learn from your failures and go on to the next challenge. It's okay to fail. If you're not failing, you're not growing." -- H. Stanley Judd

Here is a summary of the main 15 points in the book. (Follow the link to get an excellent summary of the entire book.)
Re-read through each of these points slowly. There is tremendous wisdom in these words!

Maxwell further raises the challenge that if you are not failing, you are not in a position where you are growing. Without trying things and discovering ways that do and don't work, we will never truly discover ways in which to create, innovate, succeed, learn, or grow.

"Failing Forward" is a book that encourages optimistic thinking with realism, something Jim Collins echoes in his concept of the "Stockdale Paradox", named after Admiral Stockdale. (He was the highest-ranked Viet Nam POW and kept prisoner for 7 years. Stockdale consistently kept faith that he would eventually be freed from his prison, but knew his release might be a very long time in coming. He was eventually released and received the Congressional Medal of Honor for his heroism and perseverance.)

Since reading "Failing Forward", I have been amazed at how my own perspectives on failure have changed. I think it's going to be a lifelong journey, but I am becoming more comfortable with the idea of taking risks, facing uncertainty and making decisions with uncertain outcomes that may involve failure. I don't know how or why I got it in my head that failure was such a bad thing, but I know I am not alone in having internalized this lesson. This book seeks to unteach that lesson and replace it with a far more freeing one. It does so without being Pollyannaish in any way.

Perhaps the greatest lesson of the book is teaching you to give yourself grace when you fail or fall short of perfection. I think this is a message many (myself included) need to hear.

Now that I'm studying economics, it's interesting to see how many of these ideas tie directly in with theories of entrepreneurship and descriptions of economic actors. Concepts of risk and reward, uncertainty, discovery, innovation, trial-and-error are all large parts of economic theory and tie-in to great lessons about life. We were just discussing choice under risk and uncertainty in Bryan Caplan's class last night and I couldn't help but think about some of the lessons from this great book.

While not an academic work, I'd certainly credit this book with being my first introduction to many of these ideas and very influential in my thinking. It has helped give me better rationale for being more adventurous and risk-taking in life. Becoming comfortable with these ideas certainly played a big part in my decision to quit a good paying job of being an engineer and coming back to school to work on my PhD. 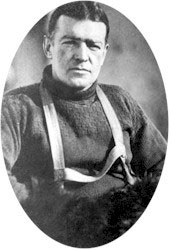 One of the greatest examples I know of a man who knew how to "fail forward" is that of one of my personal heroes, Earnest Shackleton. He was the leader of an expedition to Antarctica in the 1914. Shackleton and his crew sailed from England to Antarctica and their ship was trapped and eventually crushed in the ice, in an age with no ability to communicate with the outside world and no hope of rescue. Shackleton led his men for two years through insurmountable odds and constant set-backs. He and five other men eventually sailed across the Drake Passage, one of the most dangerous stretches of ocean in a 22-foot lifeboat, considered one of the most incredible feats of seamanship in the history of man. Shackleton went down with 28-men and, in one of the most amazing stories of human survival, returned two years later with all 28 men still alive. I read his story in the book "Endurance" by Alfred Lansing during my own expedition to Antarctica.

I cannot recommend both "Failing Forward" and "Endurance" highly enough! These are two books that should be added to you collection. Be sure to read them both. They will change the way you view both failure and perseverance and could possibly change your life!
Posted by Brian Hollar at 8:27 PM

Email ThisBlogThis!Share to TwitterShare to FacebookShare to Pinterest
Labels: antarctica