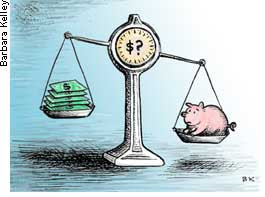 We're only four days into the new year, but many people may already be stuck, wondering how they will fulfill their weight-loss resolutions. Of late, employers have been getting into the game, paying their workers to lose weight and thereby cut some corporate health-care bills. The results of these programs have been fairly predictable, at least for an economist like me. Employers who use weight-loss incentives inadvertently encourage workers to gain weight before the first weigh-in.

But if incentives matter, then surely any economist worth his weight should be able to design a diet program that works. I had been trying to lose 10 pounds for what seemed like a decade. I had lost about 378 pounds during my struggle, only to remain nine pounds short of my target weight.

So I heeded the suggestion of Tyler Cowen, an economist at George Mason University, and cooked up my own "Economist Weight-Loss Incentive Plan": I contracted with a friend to pay her $500 if I had not lost nine pounds at the end of 10 weeks. I and a witness (my friend's husband) signed the pact. My friend similarly obligated herself to take the payment and to spend it on herself. She affirmed her solemn pledge with her signature, witnessed by her husband (with a big grin).

I had her sign because I wanted to make sure that she would not wimp out on me at the end of the contract term and refuse to take the payment out of guilt. I wanted to be bound for the full cost (and pain) of my commitment.

In other words, I wanted to maximize, within tolerable limits, my potential financial pain in order to maximize my incentive to lose the weight.

At the end of the 10 weeks, I had lost 14 pounds--five pounds more than required by the contract.

See more on how to use self-contracts to lose weight and achieve goals. Simply brilliant! (Unless Bryan Caplan is right and much of our talk about self-control problems has more to do with social desirability bias than with actual desire to change.)